The University of Zurich is organizing an international symposium, from 16 to 17 November 2021, in the context of:

“A DIALOGUE OF THE ARTS: CONCEPTS OF SACRED SPACES IN ARCHITECTURE AND ITS DESCRIPTION IN LITERATURE FROM EARLY MODERN TIMES TO THE PRESENT”

The symposium is free, will be open to the public and can be followed remotely via Zoom.

The conference will consist of talks in German, English and French. The audience can choose the talks they wish to attend. The language of each talk is communicated in the programme.

PRESENTATION OF THE SYMPOSIUM 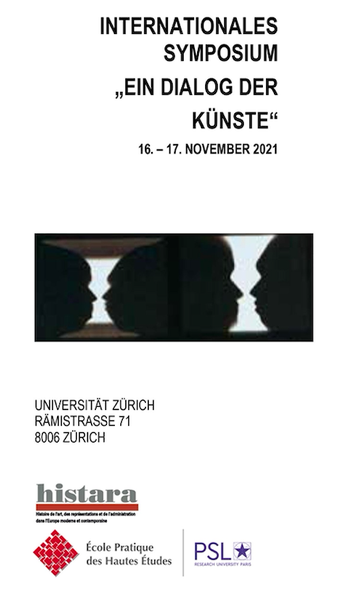 to the present and including all places. It explores the possibilities of widening and enriching the methods of the history of art. Larry E. Shiner stated that “if we begin with a sacred/profane or religious/secular dichotomy every piece of evidence tends to get polarized from the beginning and we end up with artificial paradoxes. On the other hand, if we begin with the concept of human spatiality, of lived space with its fundamentally heterogeneous, oriented and meaningful organization, we can accommodate the kinds of extreme phenomena for which the concepts of sacred and profane space were developed without distorting the phenomena which lie between these poles.” (Larry E. Shiner: Sacred Space, Profane Space, Human Space, in: Journal of the American Academy of Religion, 40 (1972), 425–436).

The aim of the 6th International Conference is to question phenomena “which lie between these poles” of sacred and profane space, and this by relying on literature of different languages from early modern period to the present. The past five conferences have shown that literary descriptions of different times and languages are a witness of the time in which they were written: on the one hand they are an important contribution for understanding the development of methods in art history, on the other hand they can disclose new interdisciplinary dialogues. Literary texts of different genres like prose, poetry, travelogues, diaries as well as letters and other categories are door-openers not only for new art historical perceptions, but can also give hints to new methods for the discipline. This means not only the breaking up of the periodical conception of art history, but also the architectural and spatial categories which define it. The symposium will engage and continue new dialogues for the different shifts of time and genres that crosscut cultural contexts, present diachronic perspectives or establish relationships between different research areas.